So we decided to purchase ourselves an Air Hawk 2 so we would be able to have a bit of a bum relief on those longer days travelling on our Chasing Horizons Charity Round the World Motorcycle trip.  As we have a rally kit seat, it’s pretty rock solid which is no problem for those days off roading and standing.  Some people even find comfortable after a couple of hours of riding (Sam being one!)!  But… my delicate derriere wibbles at the thought and thus… the Air Hawk 2 was a happy grab.

How it works:
In short, it’s a blow up seat with a variety of pouches of air that you inflate via one metal inlet.  When you plonk your bum on it the air moves from pocket to pocket to level out.  Depending on your preferences you can make it so the air distributes about a fair bit by semi inflating it or alternatively make it a little more sturdy by fully inflating it.

Comfort:
This is what it was all about.  Comfort.  For me, no-man-bits-Clare, it’s pretty near perfect comfort wise.  I have different butt and riding days so it’s nice to be able to inflate/deflate it with ease depending on my mood/the length of the day/style of riding.  I have no real complaints other than the fitting which can end up being a right pain in the arse (no pun intended!).  I will go on to talk about that in the fitting section though.

Sam, however, has a few issues with its comfort to say the least!  When he has it at a “comfortable” setting (half blown up) he takes a seat and as the air moves according to his body weight it shifts backwards… and forwards.  This inevitably pushes up his… well erm… family jewels, causing his eyebrows to raise beyond his forehead and his voice change to a pitch that makes herds of dogs go wild.  He did use it for a while through certain parts of Africa, normally close to fully inflated to prevent the uprising of the man jigglies.  Although he says it alleviates pressure from his butt bones, he’s now grown used to his hard seat and this now takes preference and the Air Hawk 2 is left disused in my pannier.

The thing is, this probably has a lot to do with the seat it’s on.  As it’s quite narrow, there’s more area and emphasis on pushing the air up front.  Sam’s wondering whether on a more girthier seat it might provide less cleavage in his nether regions than this seat.  Any thoughts people?

Quality:
As far as I’m concerned the quality of the actual inflatable rubber pouches is phenomenal.  Daily use for 8 months through minus temperatures, torrential rains, horrific heats and my clumsiness and it’s faultless.  The metal tube you use to inflate the Air Hawk 2 did get a little stiff in the deserts but nothing a bit of vaseline didn’t resolve.

The exterior cover is pretty tough wearing too.  A soft upper material which is stretchy has managed to stay in reasonable good condition and not stretch.  The underside is a rubbery texture to prevent slippage when it is attached (ha!)
The major let down though?  The hoops and straps to attach.  Some of the had hoops ripped off by Italy (less than 2 weeks into our trip) and the straps?  They’re bra straps!!  No joke, plain and simple bra straps.  I just threw them away and ended up stitching on an alternative solution.  When you’re spending quite a whack on this I just cannot understand why on earth they did not consider reinforcing the loops and devising a much more suitable strap.

Fitting:
As said… bra straps.  I mean seriously, what the monkeys were they thinking!?  They give you these detachable bra straps to hook loosely on to non-reinforced loops and tuck under the seat to attach to the opposite loop on the cushion.  They’re semi elasticated and adjustable (as per standard bra straps) but they do not give you much flexibility when replacing the seat.  To have the seat fitted well you have to have the straps reasonably taut, which in turn on the KTM 690 Enduro R 2012 seat means the straps put a lot of pressure on the internal electrics under the seat… not something I was particularly comfortable with.  If you loosen them up… the straps end up wiggling loose from the loops as they are just so shockingly diabolical. 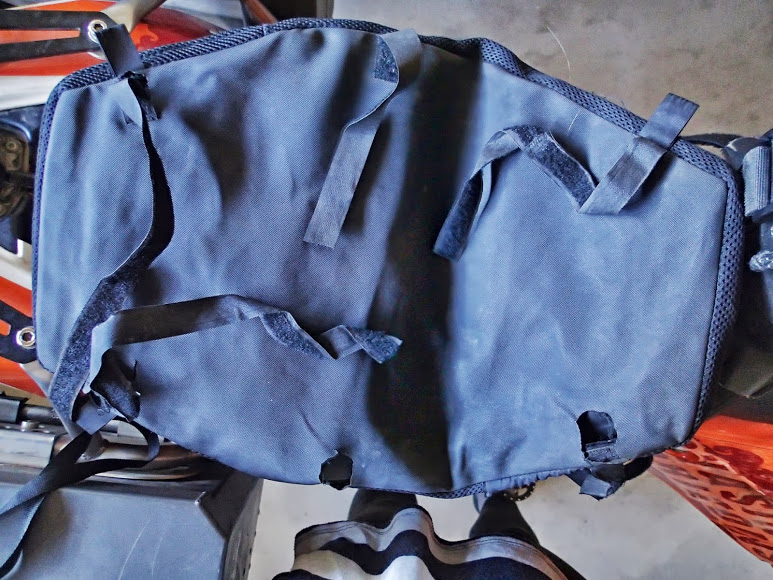 It’s a rubbish system.  Plain and simply pants.  Eventually they ended up tearing the loops off.  Most irritating.  I spent a couple of evenings trying to sew on velcro alternatives (have you ever tried to hand stitch velcro?! Broke two needles… absolute bugger!) and then stuck velcro on the underside of the seat to hold it in place.  This worked very well until Sudan and it’s shocking 55 degree celcius heats which melted all glue!  Now?  Well I partially tuck it under my tank bag and then tie the front velcro bits to my tank bag.  The back flaps about if I stand which is annoying but meh! It works!

Pricing:
For the actual inflatable cushion I think it’s top notch quality and of a reflective price… but then it’s horrendously let down by some incredibly crazy idea of being able to attach it by bra straps and loops which aren’t reinforced.  It’s as if the makers brought this amazing product together and the night before the release realised that they had forgot to figure out how to fit it to the bike and used the nearest resources they had to rectify this – bra straps!  I cannot see how any more thought went in to it… complete fail!

Overall:
Despite my rather grumpy reflection on the fitting, I love my air hawk 2 and rarely travel without it.  Even offroading I just deflate it and leave it on.  It’s saved my butt from becoming a monstrous pain, such a comfy design.
Sam… has reservations.  Again though, most probably due to the seat it’s on although he’s telling me it’s because he’s hung like a donkey! Men!! *rollseyes*
Hoping it’s been a helpful review :)